Good Deed Of The Day 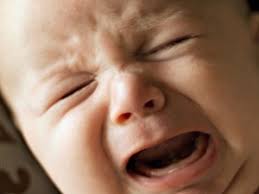 Friday six p.m. I had had a very full clinic day and was on call for our practice. I was BEAT but I sprinted in hard rain to the station to catch the train I could see coming, so that I could get back to my car, drive to my mom’s, have family dinner, and then herd my kids home to their bedtime ritual.

I made the train, though somewhat soaked. My mind was fried but I stood there flipping through the days’ news, and especially the latest from Syria. The CNN video of a white helmet volunteer sobbing as he rescued a two-month-old baby from the rubble of a bombed civilian home caught my attention and as I watched it, I tried not to cry.

I glanced up from the video to see if anyone was noticing that my face was getting that scrunched-up-blinky-eyed-tears-about-to-fall look, and I realized that everyone was staring at someone else entirely.

At the far end of the train, a mom sat with a toddler in a stroller in front of her, and the toddler was SCREAMING. Not whimpering or even steady crying, but harsh-throated howls accompanied by full-on flailing and kicking. He was probably two, two and a half years old, and just miserable. His hair was plastered damp with rain and sweat. His mother was trying, but not able to calm him. She had a hopelessness about her, like she had been trying to calm him for a long time.

And my fellow commuters were being total assholes about it. In one quick scan of the crowd, I caught several eye rolls, a few deep annoyed sighs, a couple of older women pointing and whispering, and even one person covering their ears. The rest buried their faces in their phones, the way I had been.

I only just noticed the situation, not because it could be easily ignored, but because I have this weird (but handy) ability to completely block out my surroundings no matter what is going on. This has enabled me to study and write in the most unlikely situations, but, I have also missed overhead pages, cries for help, and at least one flight.

Once I could “hear” this kid and “see” the drama, I was completely attentive. Not because I was bothered, but because I wanted to figure out how I could help.

The poor mom was obviously at breaking point. She was wearing a gray hoodie pulled up over her head, like she was trying to hide.

“Please stop, please stop,” she begged her son, as she pushed the stroller back and forth, not in a soothing way but sort of jerkily. “Stop screaming. Stop. You need to stop,” she repeated over and over. Her face was tense.

Then she put her hand over his mouth, which alarmed me but definitely alarmed the child even more. His face panicked, eyes wide, like he was being suffocated. When she took the hand away he took in a great breath and SCREAMED.

Holy moly, someone needs to get in there, I thought. What do I have that’s entertaining? I rummaged through my purse, but there were no stray kid things.

Then it hit me: I have an iPhone, and I have the PBS Kids Video app!

Now, I don’t get any money from PBS, but I love them. My son uploaded this app so that he could watch cartoons like Curious George and The Cat in the Hat. I quickly opened it up and made my way towards the situation. I held the phone out in front of me and let it just play. Peg and Cat, a STEM (science, technology, engineering, math)-inspired educational cartoon came up.

Thankfully, I had good reception, and as soon as that thing was within hearing distance, the screaming magically stopped. I literally just stood there holding my phone in front of the baby’s face and watched him transform from terrified misery to curious contentment.

It occurred to me that his mom may not be a television fan, but she only collapsed back in her seat and, voice cracking, exhaled: “Thank you.”

“Oh, I only have this on my phone for my kids, I’ve definitely had similar experiences with them!” I offered, cheerfully.

She seemed to be searching for words, and I realized she was fighting back tears. “How… old are your kids?” she asked, in a whisper.

My heart went out to this woman, who was hopelessly beyond exhausted. I didn’t want her to feel like she had to expend any mental energy in polite small talk.

“They’re six and four, and boy, do they grow up fast! I love your boy’s curls. He’s adorable,” I gushed. She just nodded. “I hope you don’t mind the cartoons…?” I added.

At that moment, a man nearby called out, sort of loudly: “Thanks, the ride is much more pleasant now! Glad you were here! Thank goodness for cartoons!”

I turned around quickly with the intention of saying something like I didn’t do it for your benefit, buddy and then I realized, the man was developmentally delayed. He then went into a long commentary about Public Broadcasting and cartoons in general.

The mom and I sort of listened and smiled, and I think she was thankful to be able to just sit, listen, and not talk. The baby was engrossed in the videos, only occasionally glancing up at me, and when I gave him a big exaggerated smile, he smiled back.

That was how I spent my commute home, and when it came to my stop, I apologized and got off. I was expecting to hear disappointed cries, but all was well.

I can’t do much for the suffering families in Syria beyond praying and donating money to charity, and I feel angry, sad, and helpless about it. But I was able to soothe a crying toddler and offer support to his struggling young mom, and for that small, concrete act, I feel pretty good.

This site uses Akismet to reduce spam. Learn how your comment data is processed.